Turkey has long been for many tourists a familiar place to rest, a place where there is the sea, the sun and plenty of entertainment. However, Turkey is also an ancient history, the history of which few people remember, about which little is known, the history that carries itself in the ancient monuments of architecture. What secrets they hold, probably we will never know. But to look at the remnants of the past, the ancient sights of Antalya, we just have to. 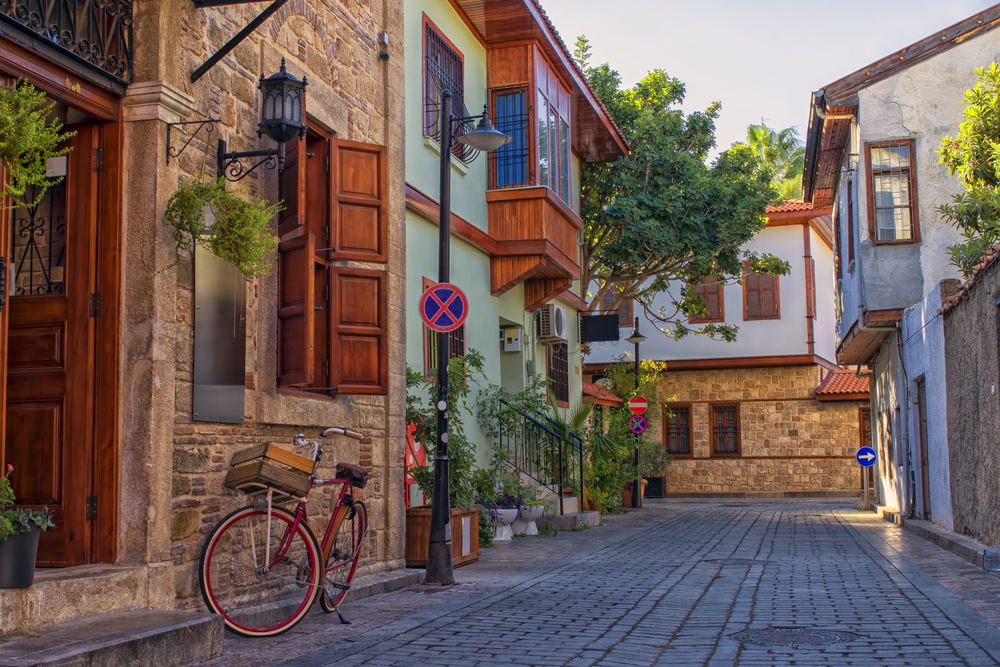 Kaleici is the oldest part of Antalya. Kaleici is a mixture of architecture from different eras, each bearing its own “piece” of history. It is a place with its own energy, with its own secrets lost in the corners of the labyrinths and streets.

The harbor of the old city

There is a small harbor by the Kaleici coast where even today boats and small yachts sit cozily. According to the official version of history, it was once the largest harbor in Europe, where goods were brought from all over the world. Looking at the harbor today, it’s hard to believe it, but the place is really cozy, quiet, and romantic. 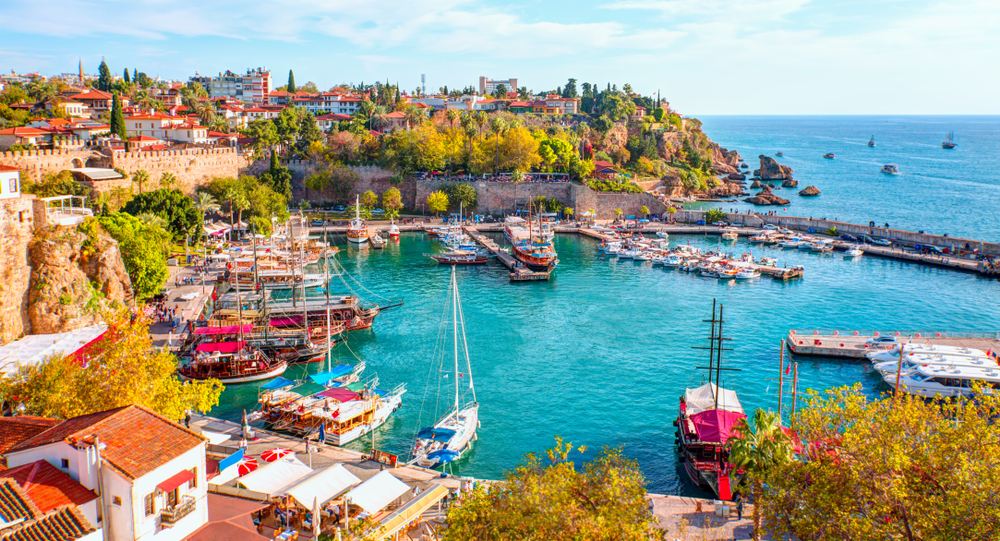 A cozy cafe and a mug of coffee with the cries of seagulls in the old harbor area is just what a tourist needs to take a break and gain strength. 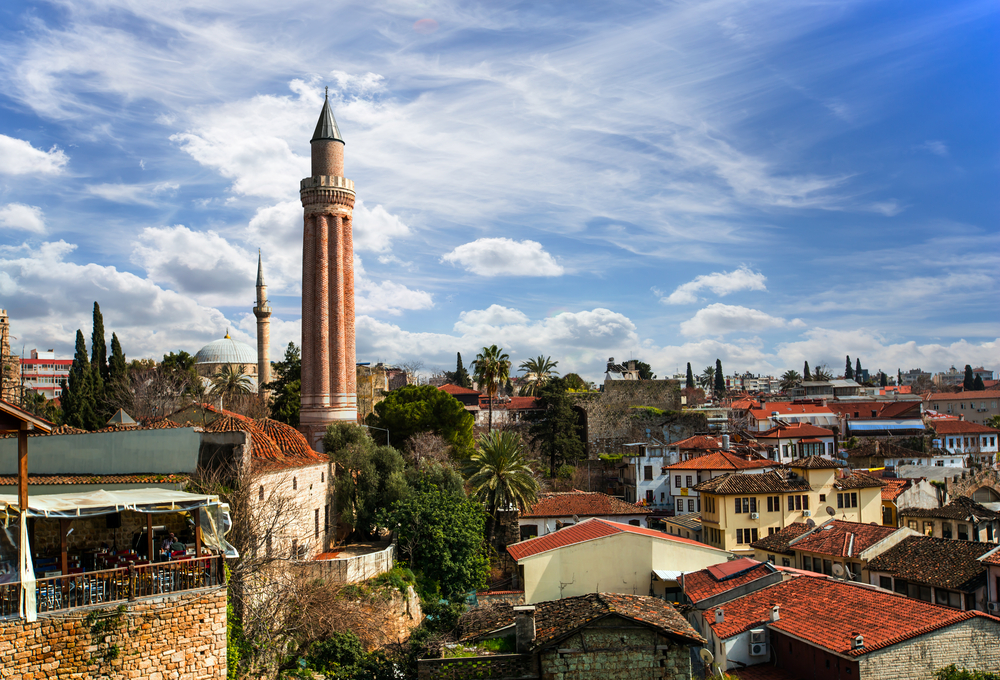 The Yivli Minaret is located in the center of the old city and is visible from almost anywhere in Antalya. The minaret is made in an unusual way, the peculiar masonry and the wave-shaped pillar attract attention. This is just a very beautiful construction, the likes of which few travelers have seen in their lifetime.

An interesting arched group which, as the guides tell us, served as a fortress gate in ancient times. This statement sounds somewhat amusing, especially when you look at the walls of the fortress. Perhaps there were gates in this place in ancient times, but clearly they were not. 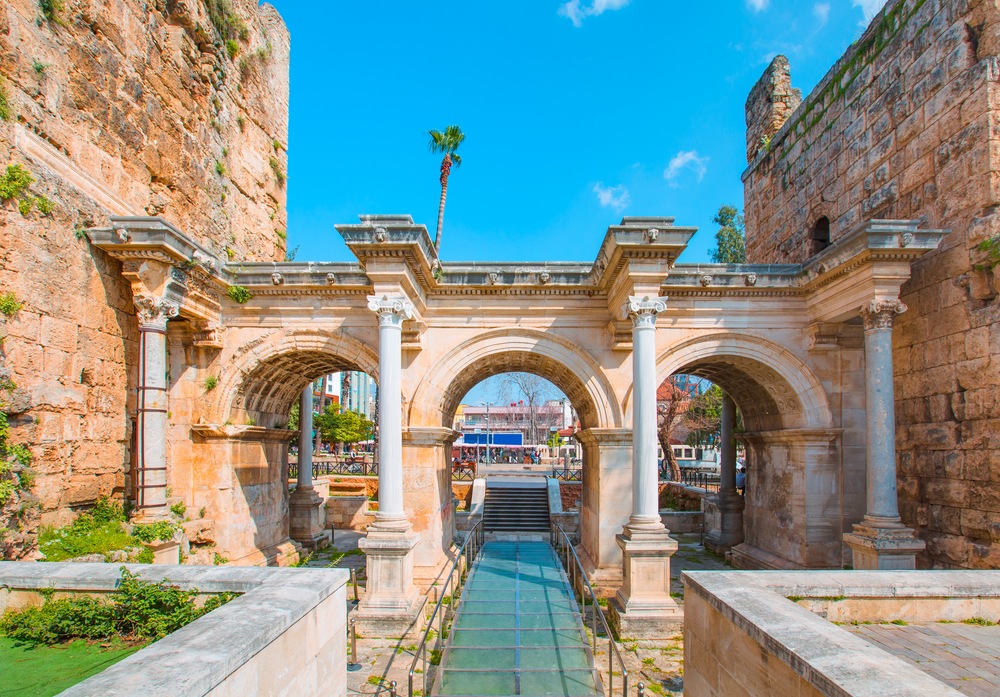 To be honest, Hadrian’s Gate looks like an accidentally lost feminine ornament amidst the grim military garrison. But to agree or disagree with this version, it is worth seeing them in person.

The ruins of the ancient city of Myra

At 150 km from Antalya are the ruins of the ancient city known as Myra. The city is located not far from Demre and often these two names are combined together. 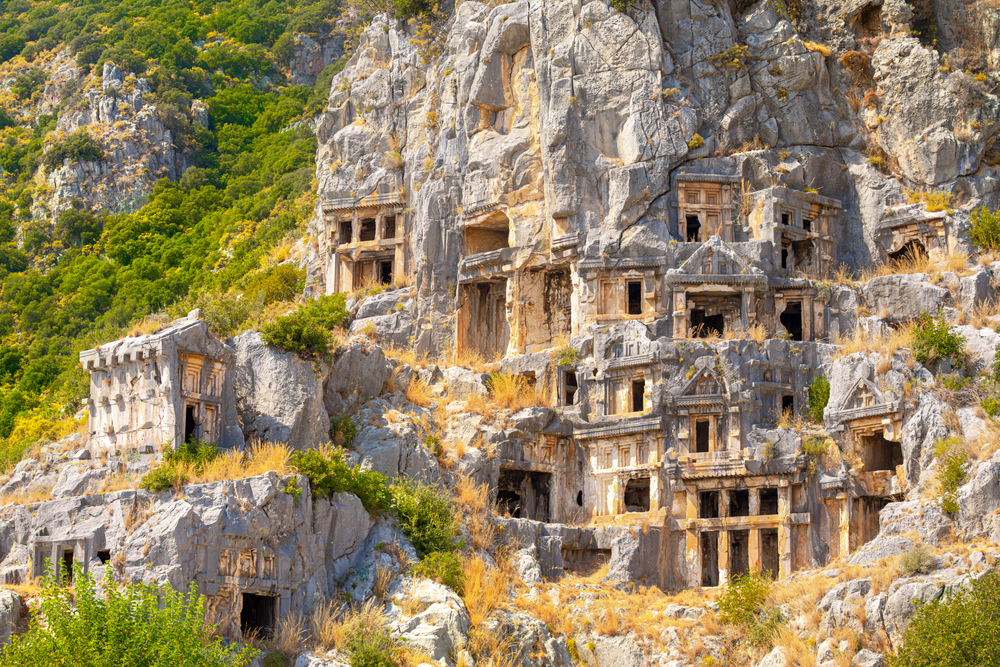 Mira is a city that has survived many eras and conquests. It is amazing with its buildings carved right into the rocks, it is believed that they are ancient tombs.

It is a must-see sight in Antalya. 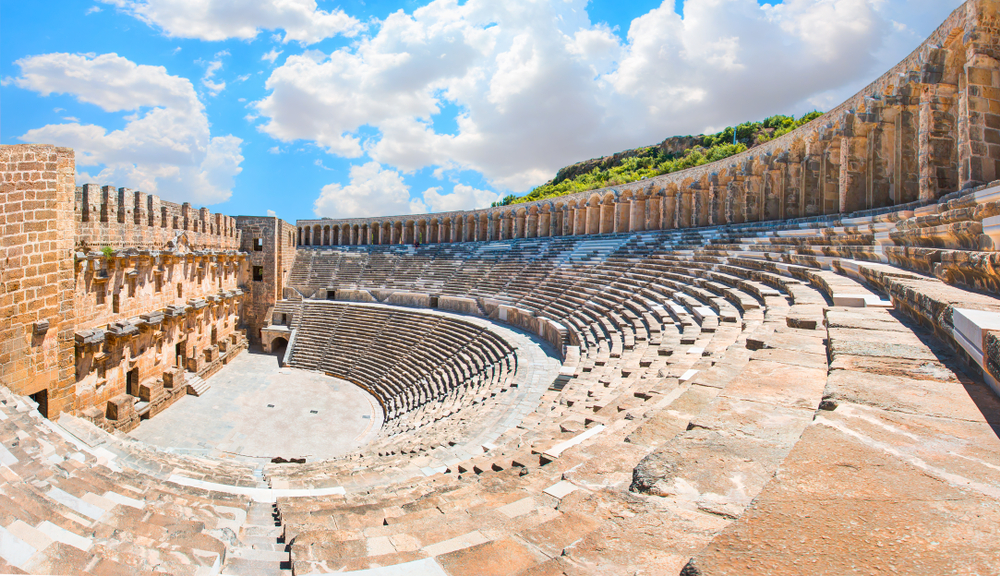 Most people associate amphitheaters with ancient Rome or Greece. But no. There are several amphitheaters from the ancient world in Turkey. Their ruins are carefully guarded and shown to tourists, although there is not a word about them in the history books. 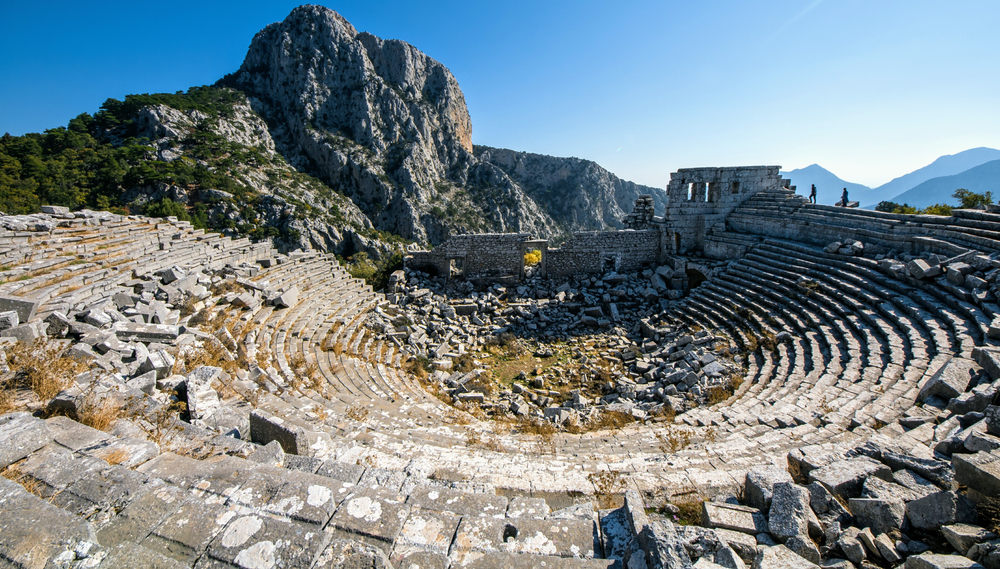 In the national park of Termessos there is another amphitheater that is not as well preserved. In addition, in a beautiful mountainous area, there are the ruins of another ancient city. According to historical information the city, which was situated in these areas, was able to survive many conquests, but could not cope with nature, being destroyed in a strong earthquake.

People are used to talking about the antiquity and deep history of countries such as Greece and Rome, but the number of ancient ruins located on the territory of Turkey, strikes and surprises. 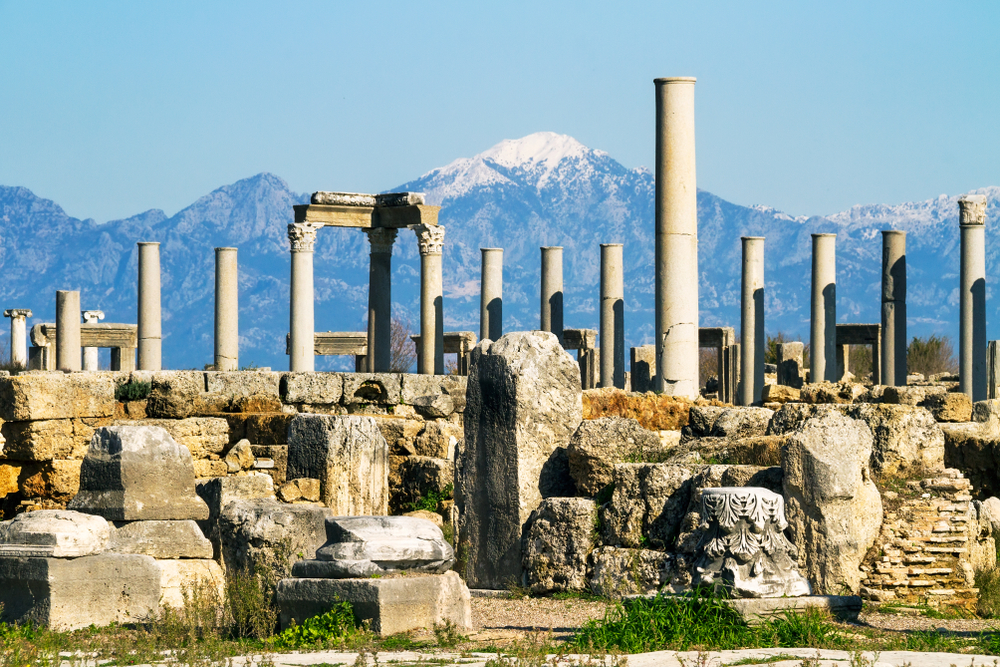 Another ancient city on the Turkish coast is Perge.

Here are preserved pantheons, an amphitheater, and fragments of huge arched ceilings. 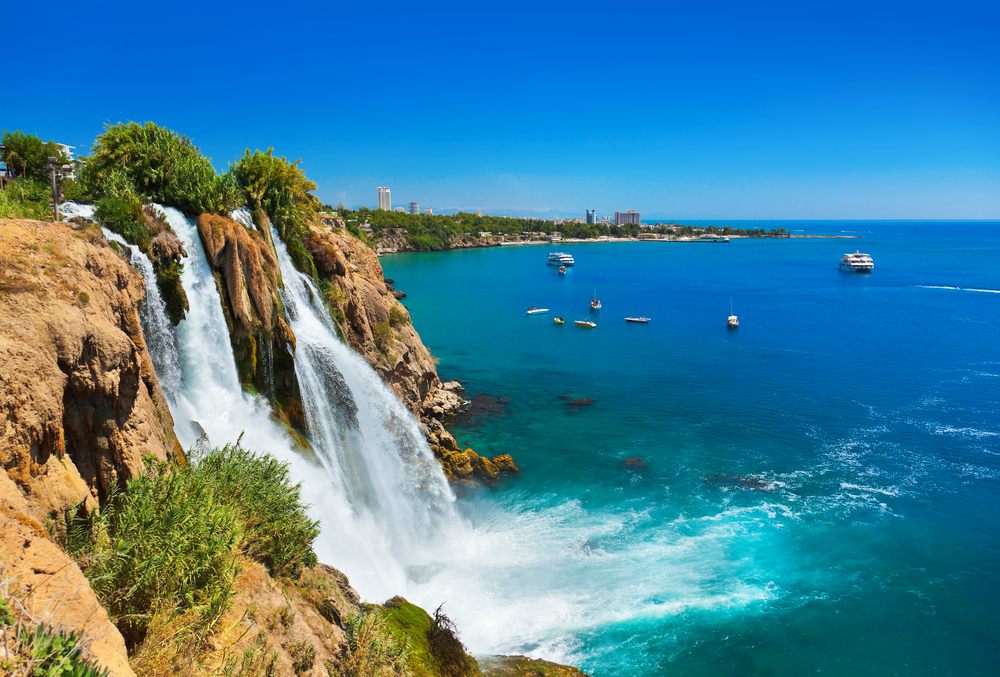 In addition to its historical heritage, Antalya is also rich in natural attractions. One of the monuments of natural elegance and grandeur are the karst springs of Antalya with their famous Düden Waterfalls. Swallow’s nests can be found in abundance on the limestone coastline. 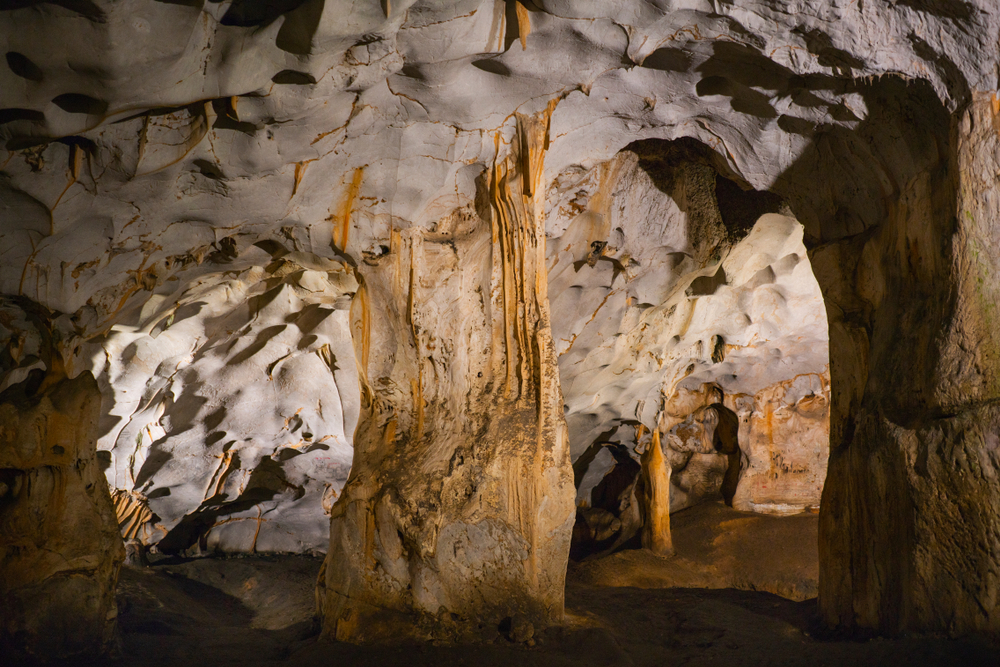 Another miracle of nature and skillful human hands – Karain Cave. Why human hands? Because a long time ago people lived in it. The cave is big and very beautiful. It is really worth visiting.

In Antalya there are many natural and architectural attractions, which should be visited by travelers.